Community groups in Wollongong are working together to reduce 70 per cent of the city’s single-use plastics by 2020, following China’s ban on foreign waste.

The ‘Plastic Free Wollongong’ initiative was created by the Boomerang Alliance, which consists of 47 environment groups from across Australia. The initiative aims to bring the community together reduce the amount of single-use plastic used and lessen the impact it has on the local landscape.

Environment enthusiast Claudette Armstrong said it is important to take action as the effect that littered plastic has on marine and wildlife is becoming devastating.

“We need to resolve this issue now more than ever, because there is evidence of plastic being found in our food and even in the water that we drink,” she said.

“Plastic Free Wollongong is so important and the work they are doing with the Boomerang Alliance is definitely going to make a difference. I’m so glad that Wollongong Council is supporting the initiative because they will hopefully be able to implement programs that can change the way we dispose of and use plastic items.”

A major role of Plastic Free Wollongong is working with local businesses to decrease the amount of single-use plastics they use. Key groups that are being targeted are cafes and restaurants, as research by the National Litter Index found that plastic drink containers comprise 44 per cent of litter in NSW.

Members of the initiative commit to reducing the amount of single-use plastic packaging used, which will therefore reduce the amount of waste that is generated. Boomerang Alliance and Plastic Free Wollongong both offer solutions for plastic alternatives, and encourage consumers to make earth-conscious choices when buying from restaurants and cafes.

The Plastic Free Wollongong website contains information for customers on how to make such choices while eating out. One of the easiest ways to reduce plastic waste is to avoid disposable items. Investing in a KeepCup not only helps the environment by reducing the amount of takeaway cups you use, but certain cafes reward customers that bring their own cups with a discount.

One of the reasons that single-use plastics are an issue is because they do not actually break down. Disposable plastics do not biodegrade and over time will break up into microplastics, which are pieces of plastic smaller than five millimetres. Plastics this small are likely to enter the food chain and cause problems if ingested. The type of plastic used in traditional single-use plastics do not decompose and will never break down completely.

There are many problems that can occur from marine animals ingesting microplastics. Over 100,000 mammals die each year from eating and becoming entangled in plastic. Although most plastic isn’t toxic itself, it absorbs any chemical pollution in the ocean it comes into contact with.

It has also been discovered that plankton are ingesting these microplastics, which has worked its way up the food chain and has been found in the seafood that we eat. Bachelor of Public Health student Michael Alekna said that littered plastic could cause health problems in humans as well as marine life.

“Although there isn’t much evidence at the moment that the plastic found in seafood is harmful to humans, this can’t be ruled out because of the pollution that the plastic could have absorbed,” he said.

“A study was done recently of mussels from UK supermarkets and coastlines and all of the mussels in the sample contained microplastics. We also know that traces of plastic have been found in our drinking water as well as other foods. It’s important that everyone should look at the way we use plastic items, and consider opting for reusable alternatives to try and lessen the impact we are having on the environment.”

The Boomerang Alliance don’t want the plastic free project to be contained to Wollongong. The group are using Wollongong as a test run to create a model that can be mainstreamed across the country, and are hoping that it will help to reduce the amount of waste produced all over Australia.

Reducing waste is critical after China’s ban on foreign waste, as Australia sent around 1.25 million tonnes of recycling material in 2017. The ban that has been put in place is a collection of import restrictions set out by the Blue Sky 2018 program launched by China’s Customs and Excise Department.

Reports from the Australian Bureau of Statistics show that between 1998-2010, the population grew 19.16 per cent, while the amount of waste produced grew by 123.97 percent; this growth is almost 6.5 times faster than the rate of growth the population saw.

This amount of waste is growing each year and according to a recent report, Australia produces the fourth largest amount of municipal waste in the world. The average Australian will produce around 647 kilograms of waste each year however, this figure does take waste created by businesses into account. 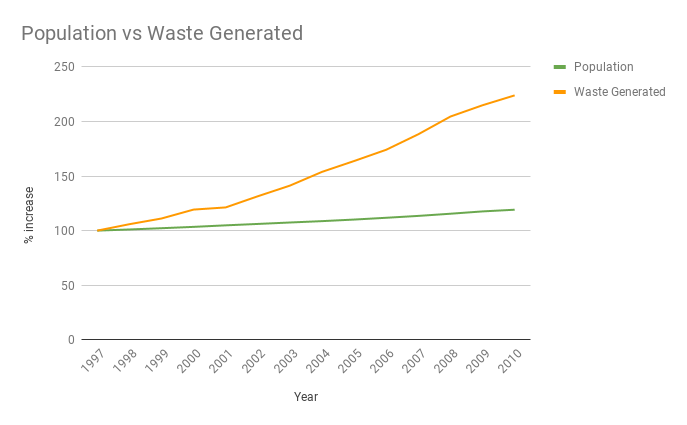 A large portion of this waste is made up of single-use plastic bags, with Australians using over 9.7 billion supermarket plastic bags each year. The decision to ban free plastic bags in supermarkets takes effect on July 1, and Plastic Free Wollongong hope that this will have a great effect on the amount of plastic that gets littered in the years to come.

Plastic bags can take up to 1,000 years to break down, but the Boomerang Alliance has created a more sustainable alternative for customers to carry their shopping. Boomerang Bags are made using recycled materials by volunteers within a community and are designed to be borrowed and then returned for someone else to use.

Boomerang Alliance also recognised that local events, such as Yours & Owls, contribute greatly to litter in the area. They worked with CitizenBlue to trial the NSW Container Deposit Scheme in 2017 with great success. The groups recovered 98.5 per cent of all drink containers which reduced the rate of litter by 65 per cent.

CitizenBlue and Boomerang Alliance have used the successful trial to create a program for major events, including festivals, that will ensure the site is kept as litter free as possible. This will reduce the amount of clean-up costs required, and also help keep the environment safe from harm.

View all posts by itsbritters